4 Ways to Deal with Issues Between Client Couples

There is nothing more awkward than sitting with a couple while they throw verbal darts at each other. And designing a home can bring stressors that cause issues between clients - which of course is made even worse if there are already problems in their relationship. UGH. But having to be a family therapist is something that happens ALLL too often in a design project. So what should you do (if anything) when your clients start having arguments or issues in front of you?! Here are my 4 best ways to deal with this sticky situation.

In the immediate moment, ask yourself if the argument has anything to do with design. If it's devolved into something else entirely, the best plan is to leave politely. You can always say, "You know what, I think I'll just step out and we can reschedule." Sometimes that will actually stop the argument entirely. Once the couple is aware of what they're doing, they may just stop the conflict and let you continue with the business you need to do with them.

The key to dealing with conflict between your clients is you don't ever want to make their argument YOUR argument. First, you do not want to take sides. That's going to lead to an ugly conclusion, even if the person you're siding with is in the right. Second, you could actually have the two of them turn on YOU! As the saying goes: "Not your circus. Not your monkeys." So don't become the clown. 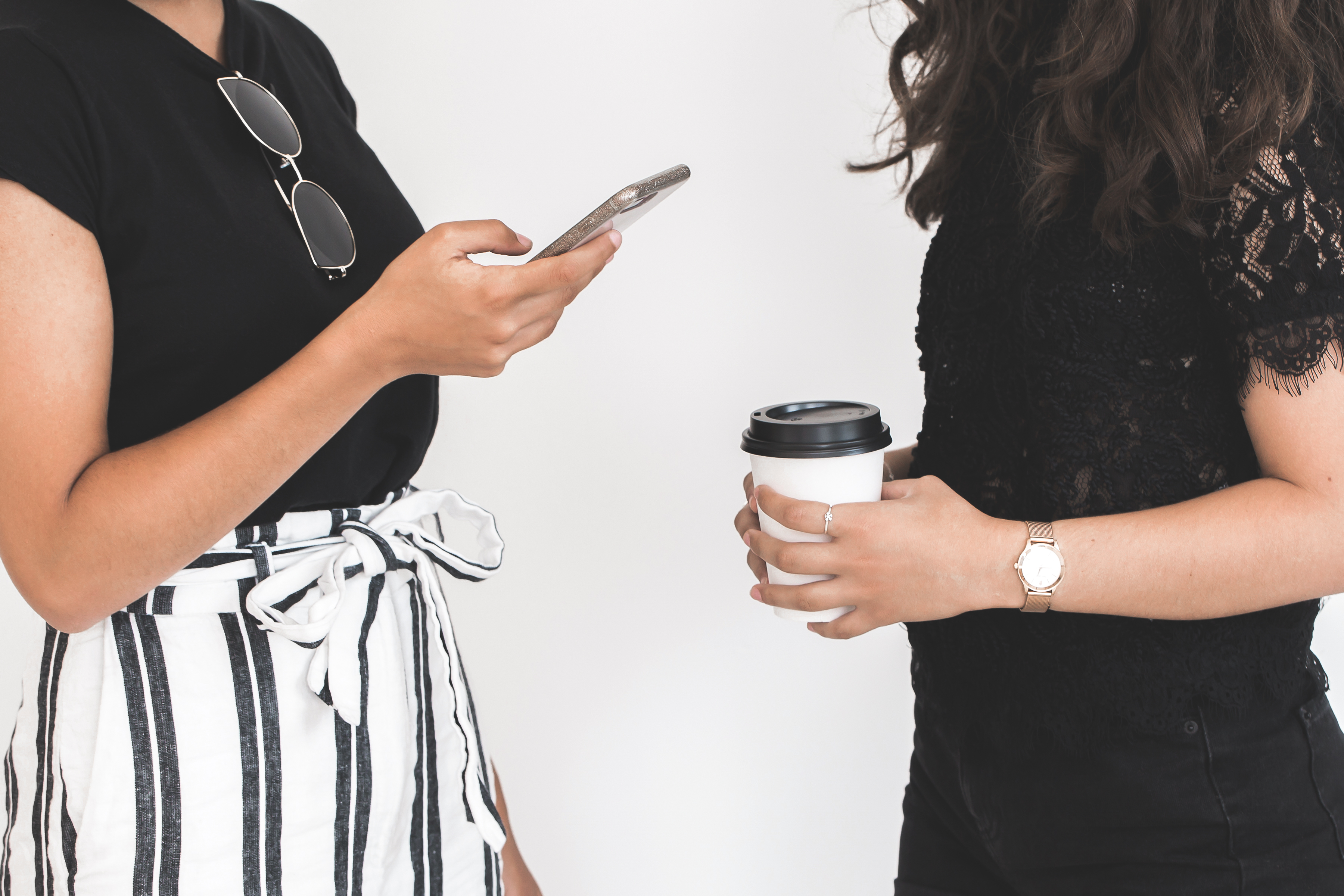 If the argument is about your design or how they want their home to look, offer solutions when you can. For example, he wants blue and she wants green. Find a lovely blue-green shade that might appeal to both of them. Or if she loves mid-century and he's more traditional, show them how two styles can be blended together for a unique look that's all their own. They'll appreciate that you're helping them get to a home that they'll both love.

What's a "spark"? Anything that will help start an argument. Here's an extreme example: I once had a client whose husband was a bit of a flirt. And of course she was not thrilled with that. So I made sure not to ever react to any of his comments and to never send an assistant over there if his wife was not at home. UGH. That isn't the norm (thank goodness), but it just goes to show that sometimes you have to tiptoe around minefields in this business. Another way to keep yourself out of the argument zone is to allow them time to discuss things. So let's say you present the budget and it sets off an argument between the two of them about spending money (that happens a lot). It's a good idea to say that you'll let them talk about it and then you'll be back to go over each item and to answer questions. Don't step into a heated discussion.

Yes, being a designer is like a being a therapist sometimes. But it's also a way to deliver great customer support and it helps you retain good clients. To help you keep that momentum going, download my free Guide to Keep & Retain Clients! 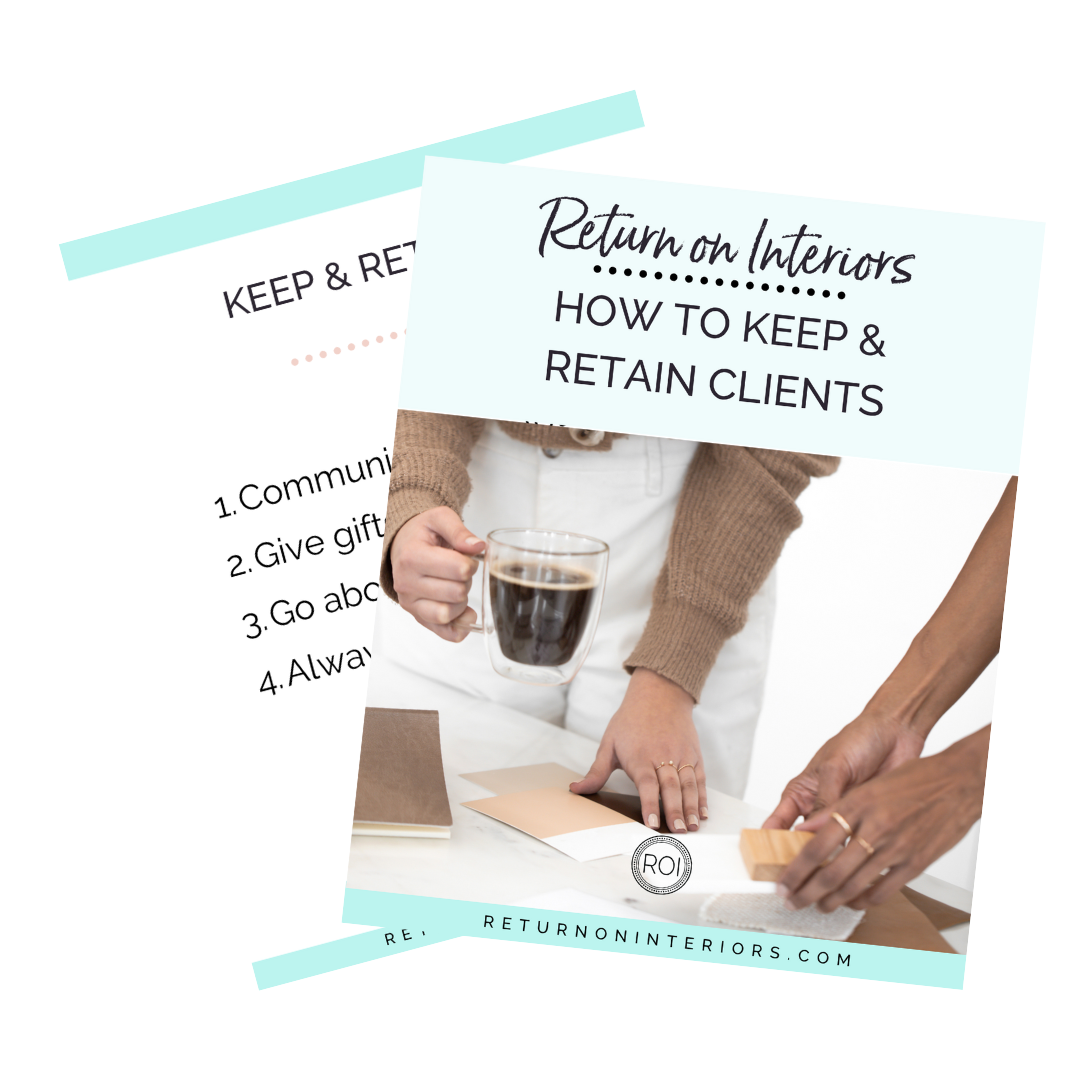 Dying to find out how Return on Interiors can save you time and help you put some processes in place?

—It’s FREE and you will also get actionable weekly tips and tactics delivered right to your email! 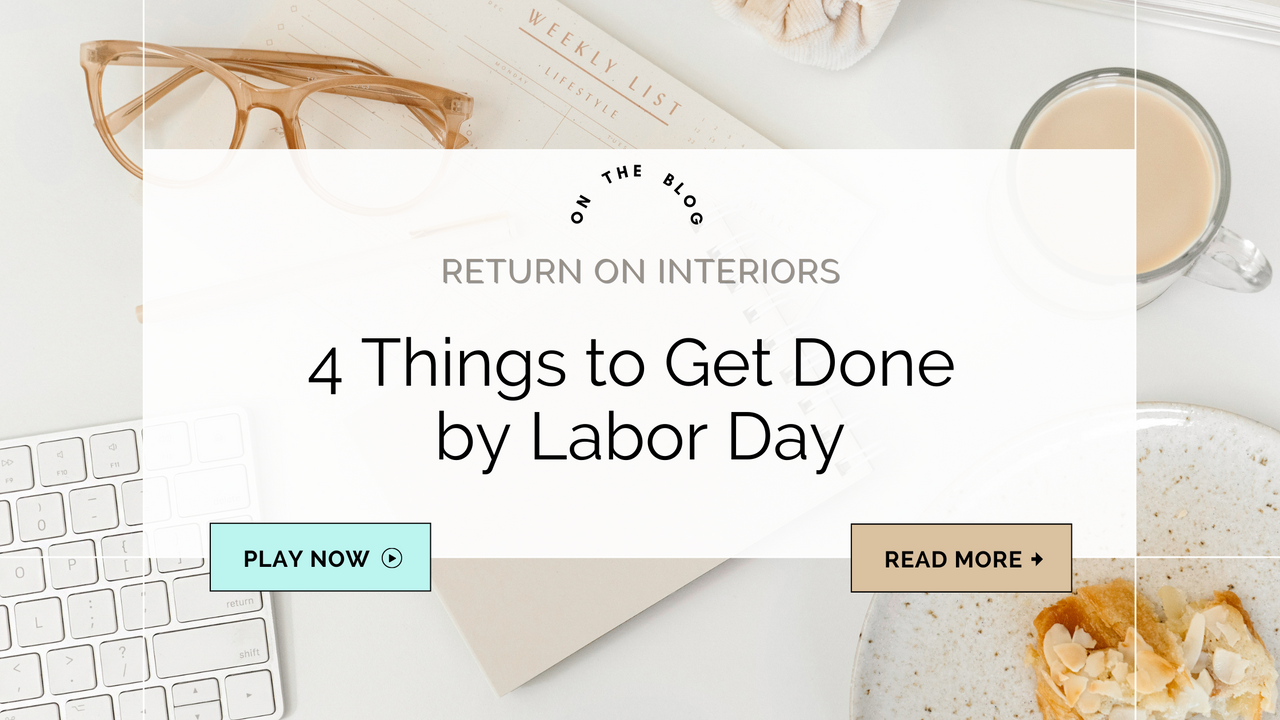 4 Things to Get Done By Labor Day 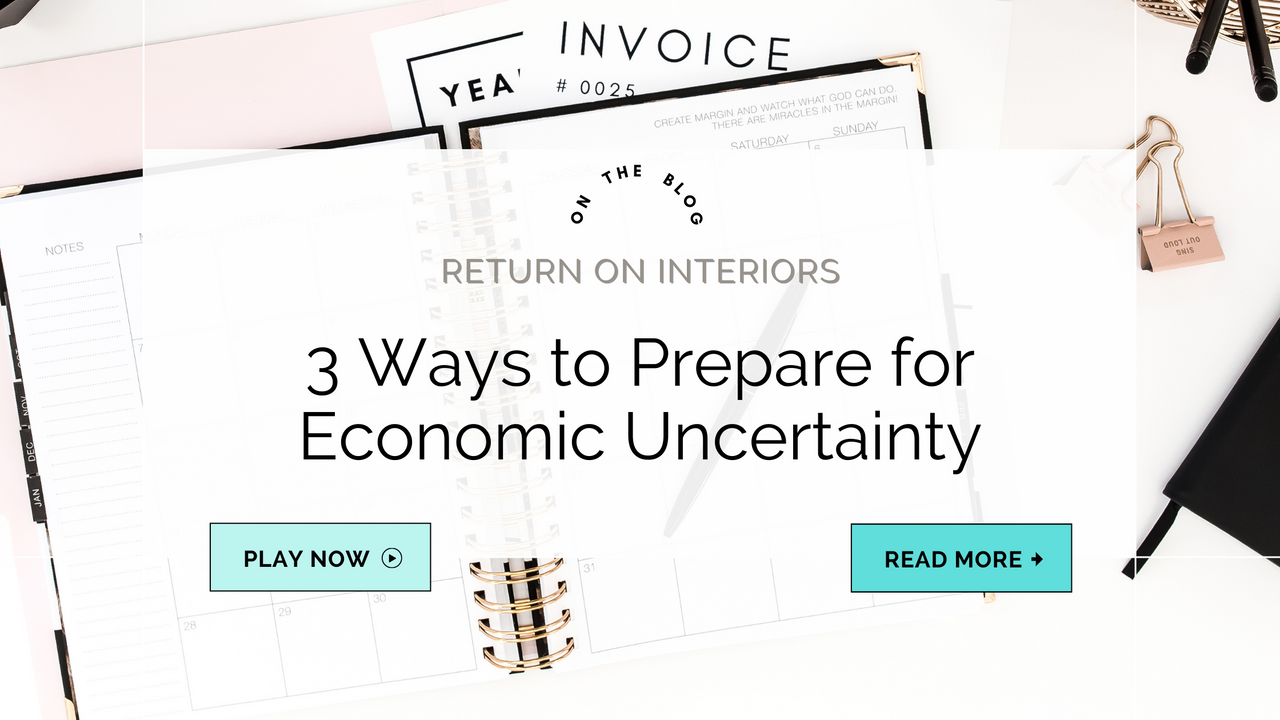 3 Ways to Prepare for Economic Uncertainty 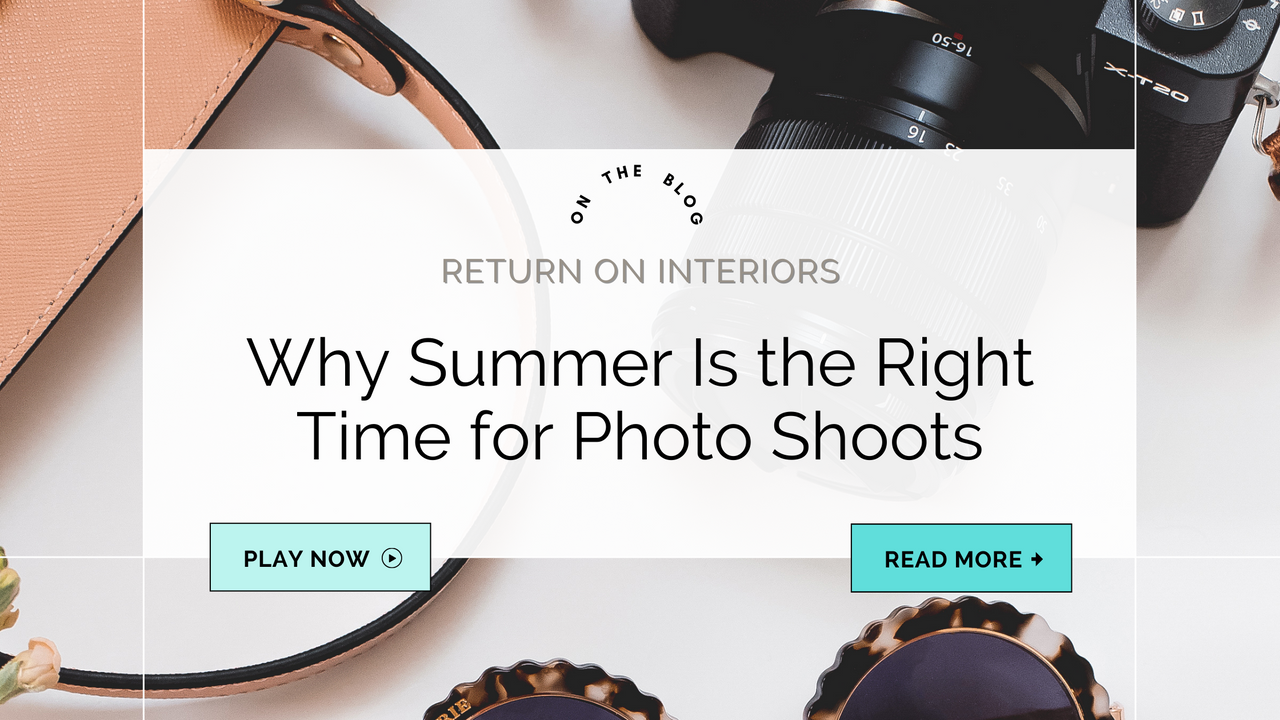 Why Summer Is the Right Time for Photo Shoots

Ready to Discover How Return on Interiors Can Help?

Organize and automate your interior design business by implementing a few business processes. Each process helps designers show up prepared and professional at every step.

Download this FREE GUIDE and start automating your business today! 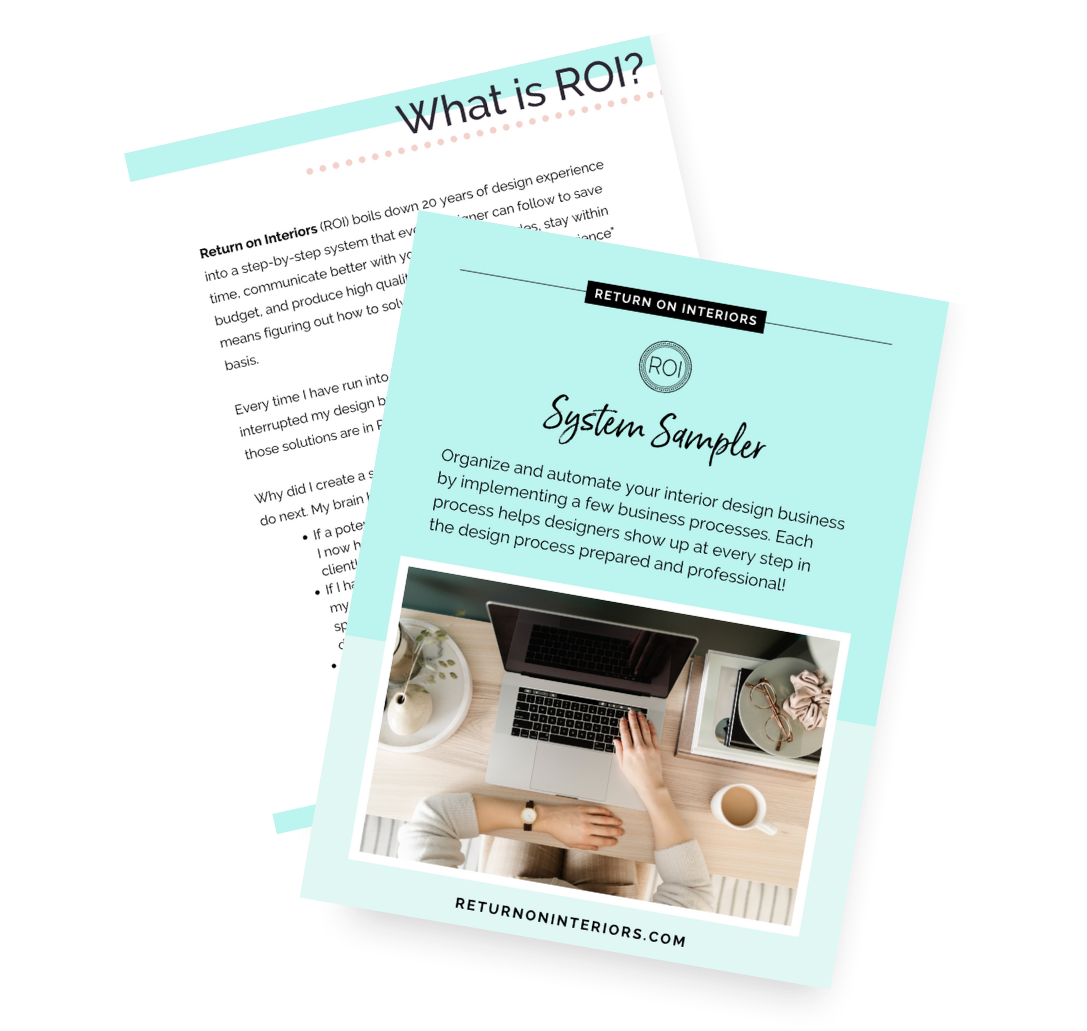 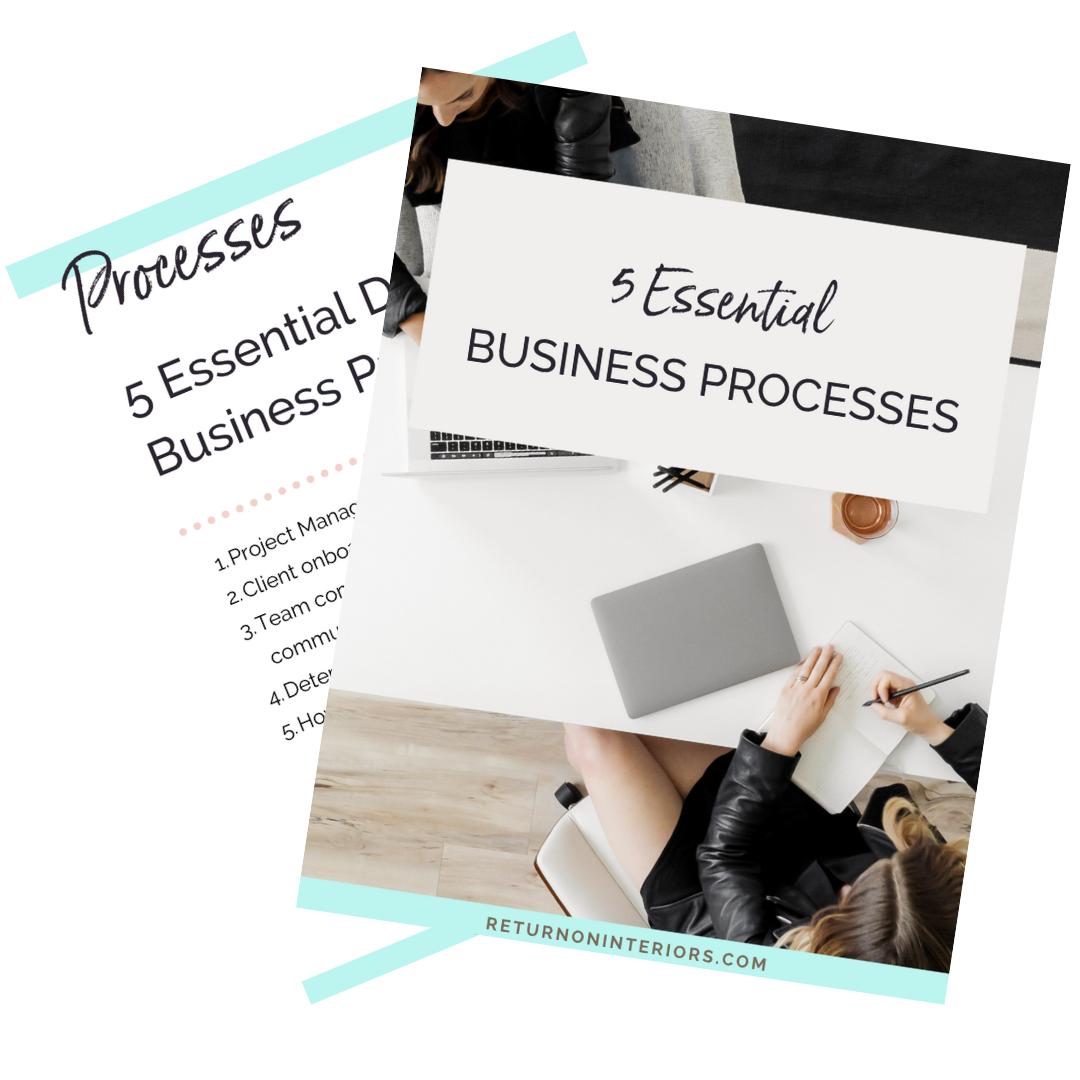 The more your design business grows, the more you get pulled away from the tasks you love to do most. Your design time diminishes as you spend more time managing people, communicating, marketing, selling services...you get the point! It's a lot of work! Grab the download and see what processes can help you streamline your interior design business!